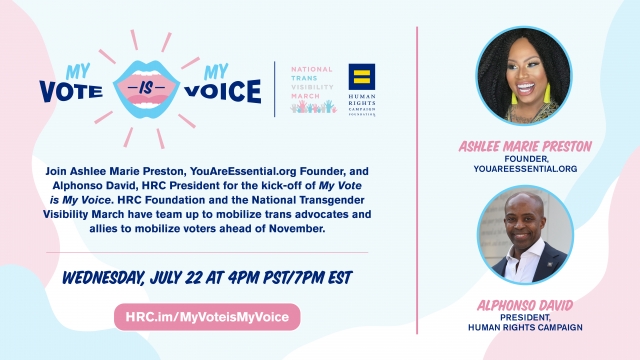 The National Trans Visibility March is teaming up with the Human Rights Campaign  Foundation (HRCF), the education arm of the nation’s largest LGBTQ+ civil rights organization, to launch the ‘My Vote is My Voice’ initiative on July 22, 2020 in efforts to mobilize transgender and non-binary community members and allies to vote this November. The initiative aims to arm the community with information and increase awareness of their voting rights.

Commenting on the launch of the voting initiative, National Trans Visibility March Founder Marissa Miller stated, “This is a call to action. We must rally all our efforts to changing the current policies that are decimating our community.”

“At a time when anti-equality forces are actively working to discriminate against transgender, non-binary and gender non-conforming people, we must fight back to support and protect our community by getting out the vote for pro-equality candidates,” said HRC President Alphonso David. “HRC’s own research shows that transgender, gender-expansive and LGBTQ+ people of color have been most likely to experience purges from the voter registration list throughout their voting lives. This community is also three times as likely to face harassment, intimidation and discrimination that prevent them from voting when compared to their cisgender gay and lesbian peers.  We must do everything in our power to provide information, support and resources to all members of the LGBTQ+ community to ensure that we can vote and that our votes are counted.”

As part of a measure to rally the LGBTQ+ community to vote, the initiative will consist of a four-part discussion series. The first will feature Ashlee Marie Preston, Founder of #YouAreEssential and Alphonso David, HRC President, on Wednesday, July 22, 2020 at 7 p.m. ET (4 p.m. PT). To RSVP to watch the first conversation, please click here.

The stakes are high for the LGBTQ+ community with the erosion of LGBTQ+ rights that has occurred in recent years.

Running until October 20th, the ‘My Vote is My Voice’ initiative will emphasize the need for the LGBTQ+ community to register and vote for the future they want to and stop leaving life-altering decisions in the hands of those who are against them.